My greatest joy is creating and celebrating meaningful life-cycle events for Jews and for interfaith couples and families. 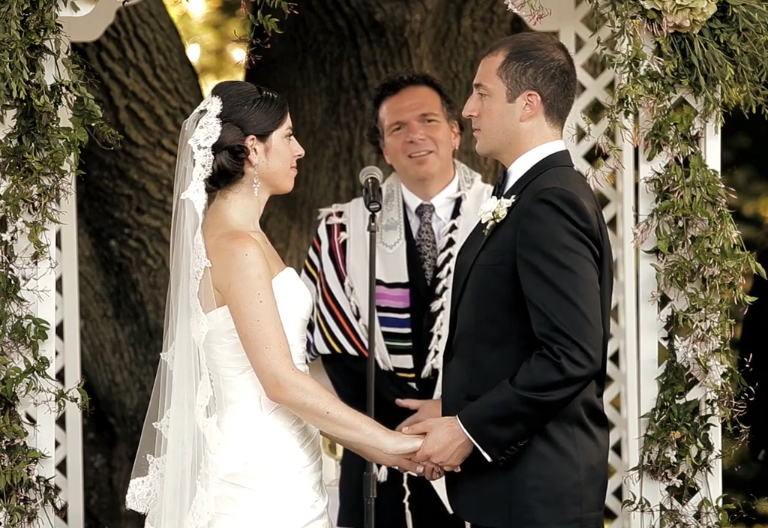 Read What Others Have to Say

Read what it’s like working with me, and how I may be able to serve you and your families needs.

Dear Lev, We wanted to take the opportunity to extend our deepest appreciation to you for helping make our day so special. Words cannot express our gratitude for you and the way you conducted our Ketubah service and wedding ceremony. It was idyllic in so many ways and what both of us had always envisioned–the beautiful weather was a perfect backdrop to the beauty of the service.

We had many people come up to us and tell us that it was the best wedding service they have ever been to! I know you were not able to attend the reception but you were warmly recognized during the welcome toast. We were really able to be present and experience the entirety of the moment–it was a very spiritual experience. The whole process and working with you was absolutely wonderful, and we do hope to keep in touch. I’m sure you have a list of people a mile long, but if couples are ever looking for a wedding reference, we have nothing but great things to say about our experience working with you.

Dear Rabbi Baesh, I am writing to you as the mother of the bride, Sara, who was married two weeks ago by you to Brad. When Sara’s dad and I walked her to you, we did not realize that we were in for an event of a lifetime: what an inspiring and magnificent ceremony! As you know, Sara was brought up and thrived in the Reconstructionist synagogue, Bet Am Shalom, in White Plains, New York. For her and our New York Jewish guests, you reinforced and strengthened Jewish ideals which, I am confident, will be carried over into the Jewish home that Sara will create for her, Brad, and any children they may have. At the same time, for Brad and the non-Jews from Maine, some of whom had never attended a Jewish ceremony, you made Judaism accessible, and several of these guests came up to me during the subsequent reception to express admiration for your conduct and wisdom. It is a true tribute to you and utterly hilarious that a Catholic couple in attendance at the wedding, who will be getting married to one another shortly, told me that they wished they could have you officiate at their wedding! Thank you and Shalom.

I am Erika’s mother and I would like to tell you how wonderful, inspirational and meaningful the ceremony was for me. Having raised five children in a Kosher home and sending them to day schools and Hebrew High Schools, through them, I have learned a great deal myself. Needless to say, going through all the milestones students go through, which include their families and various ceremonies (five times over) I have had the privilege to learn a nice amount. I have never been as touched by any ceremony or event as I was with Erika and Patrick’s wedding. It was your love, caring and the desire to lead us through a meaningful event , not just to marry them. You allowed us to experience something special. I learned and I am sure our guests learned. I enjoyed and I know our guests did. Many many many family and friends spoke about the ceremony to me. Everyone was impacted in a very wonderful way. And of course, I was so proud. And thankful. Rabbi, words cannot express my thanks and gratitude for officiating our wedding. It was such a beautiful ceremony and EVERYONE is still talking about it. My parents were so blown away, and Justin’s parents loved it as well. I am so lucky that we were connected to you, we had such an amazing day, because of you.Thank you so much, let’s stay in touch!

Lev brought tranquility and calmness that was equally matched with exciting new and meaningful ideas. As my husband and I thought about the many seemingly bridge-less gaps we had to cross, Lev helped us find ways to satisfy our expectations that felt better than compromises and in fact were warmly received by both our Jewish and non-Jewish families. Each time we left a dinner meeting with Lev we felt more comfortable and confident in how we were going to make our wedding a day filled with meaning, joy, and traditions that were familiar to both of our families. We came from different religious backgrounds that seemed so fixed, so unable to accommodate any differences and compromise, but Lev enabled us to create a day, an experience, that perfectly stretched to fold our families and upbringings into one. Lev was extremely sensitive to a variety of strong religious beliefs and feelings and was able to create meaningful alternatives that incorporated aspects from each of our religions and ideologies, making it comfortable for all. Lev helped us make Jewish traditions accessible to those who were unfamiliar with them and supported us in respecting both of our heritages, thus creating a richer and more fulfilling experience.

Dear Lev, I have, for a long time, considered you one of the most extraordinary people I have ever met. As a member of the clergy, you’ve have always impressed me that, as a spiritual leader, you are “what it is all about” (or should be). You, once again, made that resounding obvious Saturday afternoon. Our wedding service you conducted with Andrea (Minister) was from the heart. Not only was it the most impressive wedding service I’ve ever attended (all bias aside), but many people who were in attendance reflected the same thoughts. Whether they had ever been to an interfaith wedding, a Jewish wedding or any wedding, Ellyn and I received so many comments on what an incredibly spiritual experience it was. Lev- thank you again for making our special day even so much more special. You will always have a place in our hearts.

Thank you so much for conducting such a memorable, touching ceremony. All evening long, our guests commented on how beautiful and inclusive was the ceremony. Everyone felt the warmth and love expressed in the words and thoughts you created.

Many mentioned that your words caused them to recall why they had married many years earlier. Thank you again, Lev for making it so special.

Working with Rabbi Lev was extraordinary. While we love many things about Lev (like his empathy, kindness, deep knowledge of Judaism, and approachability) what we appreciate most is how he truly knew and understood us as people and an interfaith couple. For our ceremony, Lev perfectly integrated Jewish tradition with mindfulness and joy—and every single guest has commented on the beautiful, unique ceremony and how included they felt. Lev set the tone for a wonderful evening and we can't wait to grow our relationship with him for many years to come.

My name is Linda and I had the pleasure of attending my cousin’s wedding last September and you performed the ceremony. (Jen /Steve ). My Fiancé and I were really touched by the ceremony, how you spoke to everyone there with your perspective on life, love and family and faith. We are planning our own wedding, a little less elaborate (in our Home in MA) this July and was wondering if you would consider performing our ceremony. Neither one of us are Jewish, I am Catholic and he is Muslim. If you are unable is there anyone you can recommend who shares your enthusiasm and philosophy? We are getting married July 9 of this year. Again thank you for one of the most memorable ceremonies I have ever attended.

Dave and I wanted to thank for the wonderful ceremony you performed for us on 12/11/10. We couldn’t have asked for a better day and you made that possible. We appreciated all the time you took before the ceremony to talk with us. You truly opened our eyes in regards to coming together and dealing with our differences. We both have a new perspective on how to bring our different traditions together and make them our own. All night we heard from our guests what a wonderful ceremony it was and how they had never seen one so focused on family, spirituality, and togetherness. Dave said that you set the tone for the evening and he was right!

Dear Rabbi Baesh, I attended the wedding ceremony of Joeli and my cousin Brian at Mountain Top Inn in Chittenden, Vermont. It was absolutely the most beautiful wedding ceremony that I have ever witnessed. I loved what you said; your words were poignant. Unfortunately, my cousin’s family has neither a DVD/CD nor a written version of their ceremony. So I asked them for your contact info to see if you might have anything in writing and, if so, would you be willing to make your address to the wedding couple available. Please let me know if there would be any expense associated with your composition or your efforts.

I would love the opportunity to talk in detail about your needs, and how I may be able to serve you in your time of celebration.
Contact Me